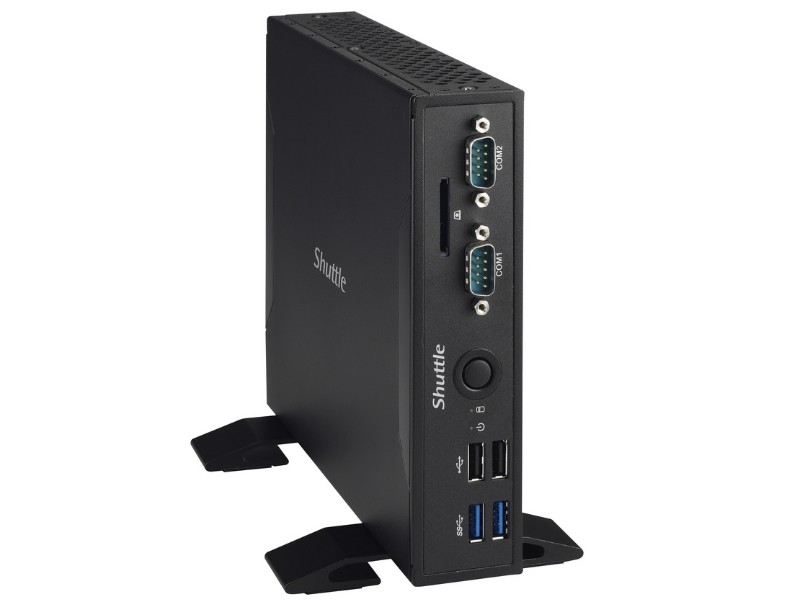 The Shuttle DS77U7 is a fanless ultra-slim PC powered by 7th generation of Intel core i 7 7500U. Its powerful graphics engine is capable of playing 4K video content. With a slim profile of less than 40 mm and the international VESA mounting standards, allowing users to decide the most appropriate back placement configuration depending on different environments. The Shuttle DS77U7 is highly connectable with USB3.0/USB2.0, two COM ports (RS232, RS232/422/485), and dual Intel® Gigabit LAN ports. Compared to previous mainstream models, the DS77U series is the first model to provide two HDMI and one DisplayPort to support up to triple Full HD displays. The shuttle DS77U7 is designed for support both 12 Volts and 19 Volts inputs, it is an industry-grad signage platform for use in commercial applications which require long-term operation such as automotive, digital signage, kiosk and more.

In addition to support the standard voltage of 19V, the DS77U series also supports 12V input voltage which enables operation from alternative energy sources. The 12V voltage input and decreased energy consumption is essential for automotive and other commercial applications.

The shuttle DS77U7 has built-in HDMI and DisplayPort video outputs to support 4K high resolution (3840×2160). Now with four times the resolution of Full HD, viewers can enjoy the super detailed and crystal clear imaging of 4K.

Designed for digital signage, kiosk, POS, and other applications which require 24/7 operation.

The shuttle DS77U7 has is built-in Intel® i211 and i219 Dual Gigabit LAN as well as support for Wake On LAN and Teaming Mode function to provide high-speed data transfer capability and a better compatibility for business network environment. With a built-in Realtek RTL8188EE 802.11 b/g/n wireless network module,provides high-speed wireless data transmission speed.

The slim shuttle DS77U7  meets international VESA mounting standards and is capable of mounting to the rear of a LCD monitor or a TV.

Use Shuttle’s Watch Dog utility to maintain normal operation and stability of the system at all times. 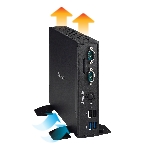 The unique fanless design eliminates the power consumption required by a fan as well as the cost of replacing fans. Use with solid-state disks can create an operational platform completely free of noise.

The DS77U series is suitable for 0 ~ 40 ℃ working environment to meet the environmental operation demands of commercial applications.
*With use of SSD and Wide Range Temp. SODIMM

With built-in RS232, RS232/RS422/RS485 interfaces, two USB 2.0 and two USB 3.0 ports at the front panel, and two USB2.0 ports at the rear panel, the DS77U series can easily connect to peripherals such as thermal printer, label printer and bar code scanner. It offers a wide range of vertical applications.

The DS77U series features two M.2 slots. One (M.2 2230) is already pre-install a WiFi card. The other is M.2 2280 with type M to install M.2 SSD or other compatible devices, proving a strong expansion capacity.

In addition to standard Power on by RTC function, the DS77U series is able to power on at specific times according to specific days as opposed to every day(RTC Alarm Everyday/Any day); this can also be turned on and off via the Windows task scheduler.

The exclusive integration low-power consumption design and fan-less cooling, the DS77U series runs only 65W adapter in full use and can keep stable for long-time operation; Compared with traditional PCs, a nearly 40% noise reduction during the operation– ideal for noise sensitive environment like hospitals and libraries.

The Shuttle DS77U7 is totally fanless, and makes an idea PC for a variety of commercial uses, and particularly digital signage.