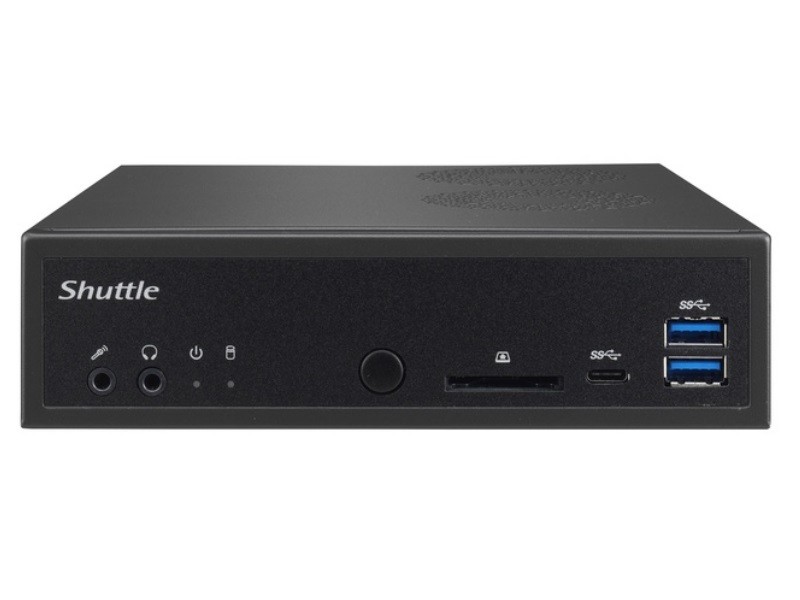 With a 7th Gen Intel® Core™ processor, the DH270 supports the latest Intel® Optane™ technology which makes your overall system performance up to 28% faster.

Spread your content across three screens via HDMI outputs. You can smoothly convey dynamic high-resolution information and target promotions at your audience.

The shuttle DH270 features native SATA 6Gbps, two USB 3.0 and one USB 3.0 Type-C interface. No more figuring out the right way of plugging in a USB device, USB 3.0 Type-C could be easier to use and is able to increase data transfer speed too.

The shuttle DH270 features Shuttle’s exclusive heat-pipe cooling module with smart fan design. The clever ventilation design allows for constant air circulation between the inside and outside of the machine resulting in high stability and low noise for long-term operation.

The DH270 is officially approved for 24/7 permanent operation while maintaining. Shuttle’s low-power consumption design. Highly reliable and long-term operation is essential for digital signage and other vertical applications.

The DH270 has significantly less cables and no daughter board. This makes for easy assembly as well as enhance thermal efficiency and system stability due to increased airflow.

The DH270 uses industrial capacitors in order to meet the environmental operation demands of commercial applications.

The DH270 is VESA mount compliant and allows for versatile integration into hardware systems. This space-saving capability makes it well-suited for digital signage applications where mounting space is a crucial factor.

Supports Power on by RTC

Power on by RTC can be enabled in the BIOS and allows DH270 users to set a time to boot up the system. This can also be turned on and off in the Windows task scheduler. RTC can help make for savings on the electricity bill and also help reduce maintenance costs.

Watchdog Timer provides excellent security features for systems that need to operate continuously for a long period of time. Use Shuttle’s Watchdog utility to maintain normal operation and stability of the system at all times.

The Shuttle XPC DH270 XPC slim, is based on the Intel H270 chipset, supports Intel 6th/7th generation Core processors. These are full desktop processors as opposed to lower specification mobile processors. With integrated Intel® HD graphics, the DH270 can support 4K/UHD video playback on up to three screens via three HDMI outputs. In addition it supports DDR4-2133/2400 memory, as well as Intel® Optane™ technology improve on processing and data transfer speed and agility. The DH270 provides multiple I/O and high-speed storage interfaces, including USB 2.0, USB 3.0, SATA 6Gbps, RS232/422/485, M.2 type M and A/E, and Mini PCIe. Thanks to Shuttle’s exclusive heat-pipe cooling with smart fan, the DH270 is capable of long-term operation at high stability and reliability levels Its slim 43mm design and VESA support to makes it easy to integrate in diverse commercial environments.