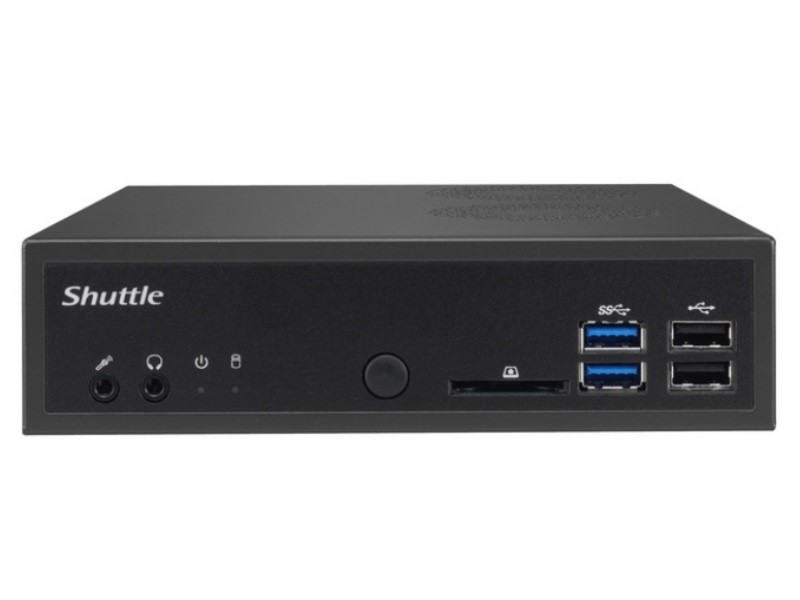 The Shuttle DH110 features a 1.3-liter slim design and body thickness of only 4.3cm. This makes for easy assembly, enhanced thermal efficiency, and system stability due to increased airflow.

The Shuttle DH110 uses industrial capacitors in order to meet the environmental operation demands of commercial applications. Its rugged design allows for 24/7 stable operation over long periods of time – even in 50⁰C environments*.
* With use of SSD and Wide Range Temp. SODIMM 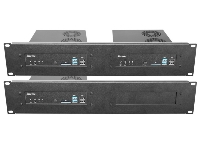 Using an optional accessory, up to 2 of these PCs can be placed in a rack enclosure occupying  2u. As these PCs run desktop processors, you can effectively fit 4x desktop PCs in the space of a 4u

The Shuttle DH110 provides a DisplayPort and a HDMI video outputs to support dual independent displays. Use an adaptor to convert HDMI into DVI interface and DisplayPort into HDMI or DVI interface for diversified signal selection.

Officially approved for 24/7 permanent operation. Thanks to Shuttle’s low power consumption design and stable operation, the PC runs highly reliable and meets the long-term demands of digital signage or other vertical applications.

The external power button is key for vertical applications where the power on button is often out of reach. The Shuttle DH110 has a power-on from remote line feature, enabling users to power on from a separate location. Users can find four-pin-connector at the back panel of the Shuttle DH110. In addition, this connector also provides the Clear CMOS function. Without opening the chassis, users can reset the BIOS settings.

The compact 4.3 cm thick Shuttle DH110 has multiple screw holes specially designed on the side of the machine. The design is VESA mount compliant and allows for versatile integration into hardware systems. This space saving capability is well-suited for application of digital signage with limited space.

The Shuttle DH110 has  built-in Intel® Dual Gigabit LAN, supports Wake On LAN and Teaming Mode function to provide high-speed data transfer capacity. Connect to a single network using two cables at once with an appropriate switch (teaming mode with load balancing or failover function) or to two different networks depending on the needs of the user.

Enter BIOS to set up the Power on by RTC function that allows you to set a time to boot up the computer and to turn off with the Windows task scheduler. This feature means saving electricity and energy as well as eliminating the cost of on-site service.

Watchdog Timer provides excellent security protection for systems that need to operate continuously for a long period of time. Use Shuttle’s Watch Dog utility to maintain the normal operation and stability of the system at all times.

The shuttle DH110 features the Intel H110 chipset & supports Intel core processors. These are full desktop processors as opposed to lower specification mobile processors, resulting in superior processioning than a typical mini PCs Is the perfect commercial PC with a robust metal chassis, huge connectivity, reliability, and scalable specification depending on your needs. The DH110 is a prefect choice for digital signage applications.